You are here: Home / Blog / My Independence Run In Baguio

Team Logan invited us to be in Baguio.  Initially, we planned it for August but due to some circumstances, we decided to be there last weekend.  It was a nice family affair with our kids and my first race for 2011.

Our visit to Baguio coincides with the Kalayaan 10-miler Run.  Baguio will not be complete without running.  The opportunity to run in a scenic place, cool weather and tough uphills doesn’t come often.  But I asked Craig to sign me up for 5K only.  I don’t have any mileage to finish a 16K with all the uphills and downhills. Without proper training, I only have two simple goals.  First is to reach the finish line without injury or pain.  And the other is to run continuously until the turnaround point.  I don’t have a target time in mind.  But anything below 35 mins is fine with me.

Craig has to wake me up.  The night watch with Gab and the cool weather were perfect recipes to oversleep.  It was still cold on that Sunday morning.  I had to leave the house in a jacket and in a jogging pants.  However, before the race, I removed them and run with a shirt and shorts.  Your body heats up eventually during the run that wearing a jacket may bother you.

We arrived at Burnham Park with the 16K runners about to start.  After they took off, we took our places at the starting line for the 5K.

Host:  We are starting in 10… 9… … We would like to thank our sponsors for this event… blah blah blah

About a minute later.

About a few seconds later.

Within a kilometer, it was clear that I am having a hard time.  Once you get out of Burnham Park, the uphills will be grinning at you.  At this point, I was already looking forward to see the turnaround point.

However, the turnaround point was not placed where we expected them to be.  When my GPS watch showed 2.5K at rotunda near Loakan Road, there was no sign to head back.  Instead, we ran about 500 meters ahead before it says turnaround point.  My goal on not to stop and walk at the turnaround point failed.  But at least, I did run continuously for 2.5K according to my watch.

I think the competitiveness in a runner is still very much in tact in me.  In the middle of the race, we would usually find some target we would like to beat to the finish line.

In the past, I would try to beat someone who is in his 20s or 30s.  My target in this race was not my norm.  They were kids.  Two boys.  About 8-10 years old.  Probably siblings.  They were giving me a hard time ever since they overtook me at the turnaround point.  I can’t let them beat me.

But it looks like they were built for this race.  Every time I would take the lead for about 50 meters, they will suddenly rush up ahead and walk in front of me.  I thought they will eventually get exhausted with all that mad dash.  They weren’t.  So I used every trick in the book to make sure I came ahead.  I run a bit faster at the downhill.  I run tangent on corners.  I take short walk breaks.  But still they are able to keep up with me. I’m trying my best to finish ahead of these two kids.

Less than a kilometer to go and they are still ahead.  This is where I saw an opportunity and used a dirty trick to get ahead of the first kid.  I run up beside him and told him to tie his shoelaces.  They were indeed untied.  Really.  They were untied.  So he slowed down to fixed it.  I grinned.   One down.

The other kid was stronger.  About 300 meters to the finish line and I was still behind.  This is where it will be useful to know your advantage.  I have longer legs.  So I made longer strides to catch up with him.  He must have seen me from behind trying to close in the gap.  I saw him run faster.  But my strides were no match for him.  I finished ahead.

It must have been funny seeing me race against someone less than thrice my age.  But you should see for yourself how strong kids in Baguio in 3K and 5K.  They can be a worthy target. With Team Logan in Baguio

I felt pain after the run.  It was not muscle pain.

It was a painful ego.

I came back to Quennie showing my race bib and a finisher’s certificate.  She mocked me for finishing a 5K.  She knows I rarely do a 5K.  This is probably just be my second 5K run.  And when I told her the story about me finish ahead of the kids, she just laughed.

I then told here it was not just a 5K.  It actually measured 6K.  She just raise an eyebrow.

At least that extra kilometer gave me something to be proud of. 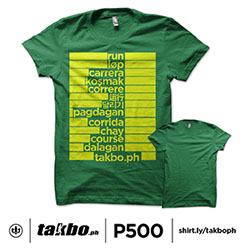