The Angkor Empire Marathon 2014 has the most scenic views. Even if you don’t get to run inside the temples, it’s the closest you can get to a Temple Run. The race was far from perfect but in the end, the view was worth running for.

In the past, Angkor Wat only have a half marathon event. This was the first marathon in Angkor Wat and I was excited to be part of it.

Roselle aka Running Diva and I registered online for the Angkor Empire Marathon. The race kit claiming would be only until 8PM in Saturday. Since we will arrive on Saturday evening at 9PM, there is no way we can get our race kits on the schedule provided.

We tried contacting the race organizer but the only option they gave is for someone to get the race kits for us in Siem Reap. 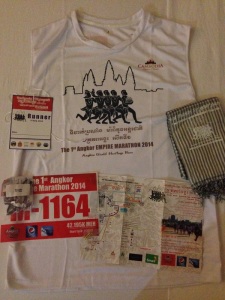 The race kit. I love the scarf!

I was hoping I can get the race kits on race day instead at the event site itself. Although being a race organizer myself, I do understand that it can be a hassle for the organizers who would already be busy preparing for the race itself.

Good thing, Janine will be arriving earlier in Siem Reap and she was ok to get the race kit for us. We all stayed in the same hotel in Siem Reap so meeting up before the race was not a problem.  Thanks again Janine! 😀 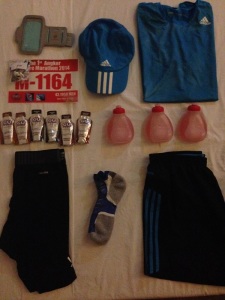 My running gear is All In!

The race started at 4:30 AM. It was still dark in Angkor Wat but the event area was full of runners from different countries. There was a roll call of nationalities and we were proud to make some noise when Philippines was mentioned. 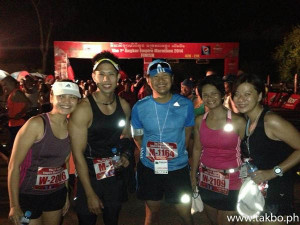 With April, Joven, Roselle and Janine

The surrounding area was very dark. I did not even realize that the Angkor Wat Temple is just a few meters away.  When the race took off, runners rushed out of the starting line and into the darkness. There were several street lights along the way but they were faint. 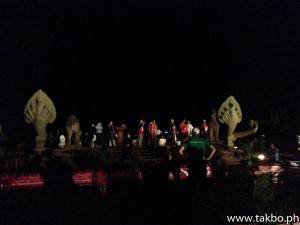 At the staring line with Angkor Wat at the back 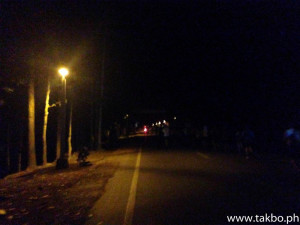 There are humps just a few meters from the starting line and some runners got tripped on it. Janine met a runner who got a bad bruise from a fall in those humps. He had to run for 42 kilometers with blood in his arms. So be careful when running in a poorly lighted road.

I typically choose running a full marathon instead of the half marathon when running abroad. I find it more challenging and more fulfilling.

There is a half marathon event as well in the Angkor Empire Marathon. The difference is that the 42K route would include parts of the main city in Siem Reap and a long stretch of road with a view of the rice fields.

If you are just after the view, the half marathon in Angkor Wat is just right. It covers the perimeter of the temples. The 42K did not have any added attraction compared to the 21K. Some parts of the 21K even looks better than the 42K route. Except for the bragging rights, you don’t miss much of the view if you join the half marathon instead of the full marathon.

The Ankor Empire Marathon is my 9th marathon so far. I definitely ran in Angkor Wat for the view. There is nothing like it. Although the route did not include running inside the temple itself, merely a glimpse of it would struck me in awe.

The first part of the route is within the city. It’s still dark at this time so you won’t really appreciate it yet. A day tour the following day would reveal a better view of the city. 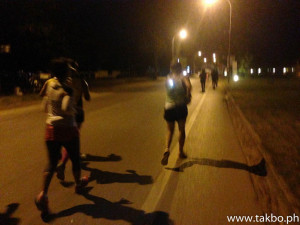 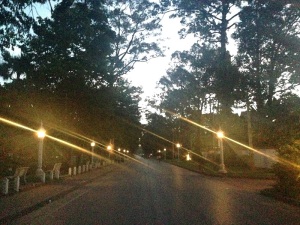 Running in the city

Then, I would be treated to a few temples and a long stretch of road to see rice fields and a rural area.

The first temples would be seen after 18K I think. Some of them just near the road where I can stop and take pictures. The other temples are several meters away. I can only see the entrance or the tip of the structures. 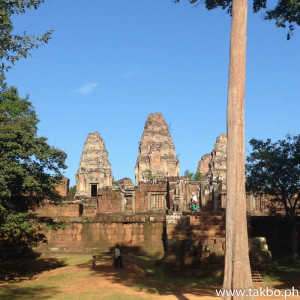 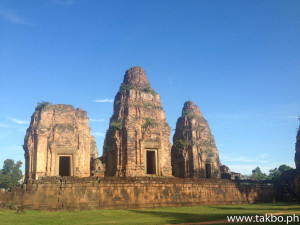 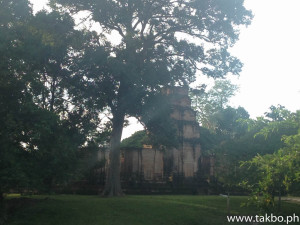 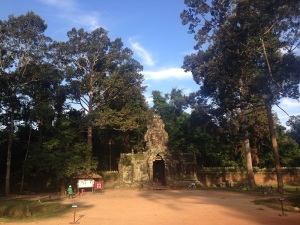 Between 20-35KM is a long stretch of trees. This is a forested area and the shade was a big relief since the temperature in Angkor Wat is quite hot. We were probably running between 32-35 C during the race.

Along the way were a lot of kids cheering the runners. They’d line up beside the road with their arms streched to give us a high five! That’s a big boost for us. 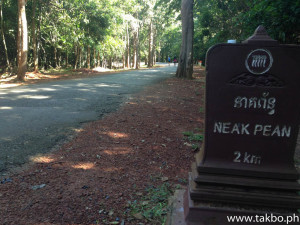 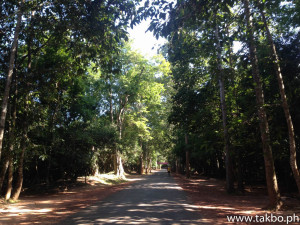 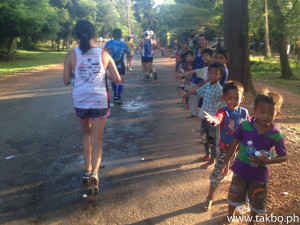 The roads are not well paved. Most of it are old asphalt. It is every dry and can be dusty.  I prefer running right in the middle of the road where it is flat.  The side are a bit banked and has potholes.  The entire route is relatively flat with no major hills to conquer.

The last 5 kilometers is the climax of the race. I was running inside Angkor Thom. This is one of the major temples in Siem Reap. From the entrance, I could already see its granduer. The colossal heads, the intricate carvings, and boulders of rocks are just awesome. It was a feast for the eyes. 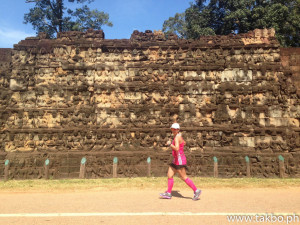 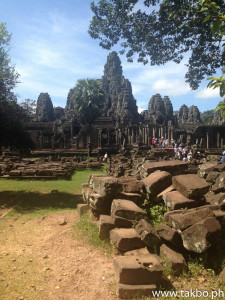 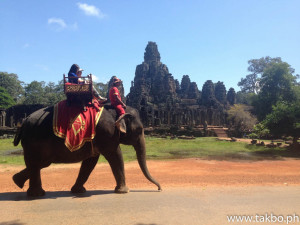 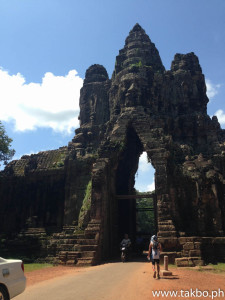 Before I made the final turn to the finish line, the magnificent Angkor Wat Temple is just at the left side. What a lovely view at the finish!

I finished the race in 5:59:17. I was just a few seconds before the cut off time of 6 hours. But the organizers were still giving out the medals even after the cut off. 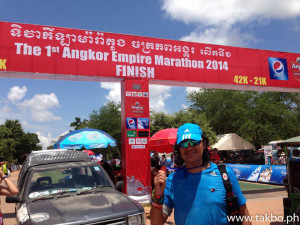 I had big expectations in the race. While the view did not disappointment, I think the measured distance was a big mistake!

My GPS watch recorded a distance of 44.83 KMS. That’s 2 kilometers off!!! While the GPS watch can be wrong, it can’t be as much as two kilometers. Other runners recorded a 46KM in their watch. The event is sanctioned by AIMS but it doesn’t say if the distance was AIMS certified too. 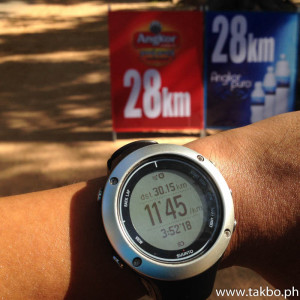 The finisher’s medal was small. I got used to getting a finisher’s medal bigger than my palm. The Ankor Empire Marathon medal can fit inside a small pouch. While it’s the smallest medal I have so far, it will be still treasured. 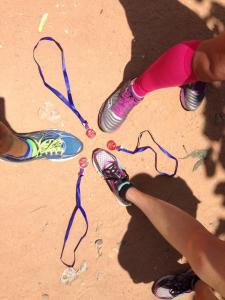 The race had several good points. I ran for the view and I got so much of it. It is enough for a reason to run in Angkor Wat.

The race support for the runners was as expected. There are water stations every 2 kilometers. Some have bananas and sports drinks. They are using a different brand of sports drinks but they were ok with me. No tummy problems. 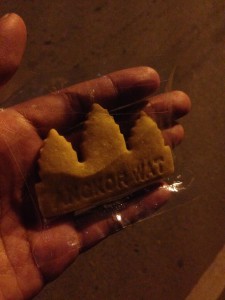 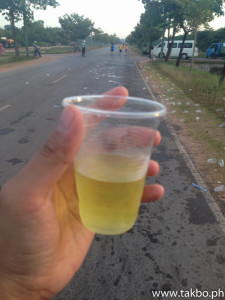 There were enough signages for runners to be guided of the correct route. There were plenty of marshals with strong support from the local police. At one point, I made a wrong turn and followed the 21K runners. If not for the keen eyes of the marshals, I would have missed the right route for the 42K and ran a 21K instead.  Thank you for the marshals.

The cheers from the children was a big plus too. I appreciate that they woke up early just to be there and cheer up the runners. I love it when I hear them cheer Go Go Go and something in Khmer that pumps me up. 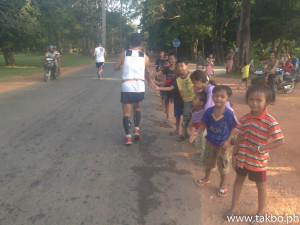 Cheers from the sidelines

There were more bananas, water and sports drinks at the finish line. There was also a massage area but we were too late to avail of that one.

The Angkor Empire Marathon will surely attract more runners in the future. Like I said, the view itself is enough to make me run the marathon.  But here’s a few words of advice to the organizers.

I hope that in the next Angkor Empire Marathon 2015, there will be other claiming options for foreign runners who arrives late for the claiming. If not for Janine, I really don’t know how else we would pick up the race kits. 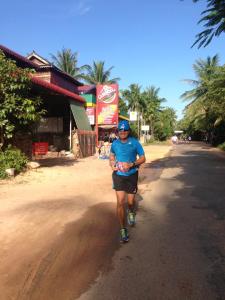 And definitely, please fix the route distance. I strongly believe the route was so much more than just 42K. If I am wrong, I want to see a certification that the course I ran was really an accurate marathon distance.

And finally, a bigger medal would be great. I might be asking too much here but I just got used to big medals in a marathon. Bragging rights… ehem…

I strongly recommend running the Angkor Empire Marathon. The view is just too beautiful to be missed. It is really worth it. 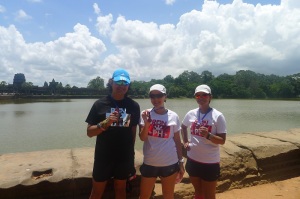 Aside from running, I love arts. I love looking at paintings, sculptures, and other expressions of art. The temples of Angkor Wat and several others in Siem Reap overwhelms me. I was getting a double dose of runner’s high while running this marathon.

For its first edition, the Angkor Empire Marathon had some shortcomings, but I am pretty sure this will be improved and will be one of the much awaited marathon in Asia. 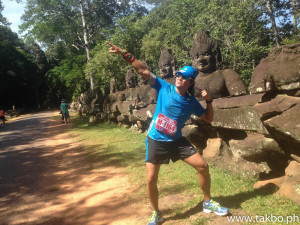 This is why I run

After the marathon, I stayed for at least two more days to have a more intimate tour in Siem Reap.  One day is not enough to visit all the temples but I was able to visit at least the major ones like Angkor Thom, Ta Phrom and Angkor Wat.  Visit the Angkor Wat last.  It looks best during the sunset.  On the second day, I rented a bike to go around Siem Reap.  I also visited the Angkor National Museum and some food trips.

You can visit my other blog at daddyandthecity.com for my travel tips and adventures in Siem Reap.

Check out more photos during race at my Flickr page.