You are here: Home / Archives for brooks shoe review 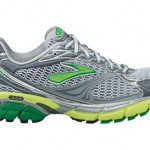 Brooks Ghost 4 is awarded by Runner’s World as Editor’s Choice for Fall 2011.  The announcement was made in the September 2011 Issue of Runners World US.  The Brooks Ghost 3 won the same award last year.  Brooks Ghost 4 is a neutral shoe with medium to high arch. The shoe has the Biomogo midsoles […]